Origin Cells of Glioblastoma May Have Been Identified 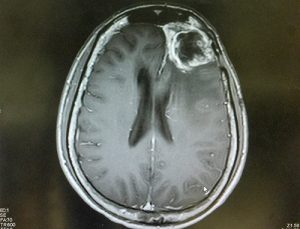 In what could be a major breakthrough, scientists at the Korea Advanced Institute of Science and Technology (KAIST) in South Korea claim to have identified the cellular origin of glioblastoma, a fast-growing type of central nervous system tumor that forms from supportive tissue of the brain and spinal cord. It is widely-regarded as one of the deadliest and most aggressive and tenacious forms of cancer.

According to the published KAIST study, the starting point for glioblastoma is neural stem cells containing mutation drivers that are actually separate from the tumor mass. This answers the question of why glioblastomas almost always grow back, even after surgery, and suggests novel ways to treat the disease, which, to date, has demonstrated itself to be incurable.

“It’s easier to understand when we compare it to fireworks,” says Professor Jeong-Ho Lee of the Graduate School of Medical Science and Engineering in Daejeon. “Every flare flying around the sky can be likened to cancer cells even though the fireworks are triggered on the ground. We found the trigger.”

Also called glioblastoma multiforme, GBM or grade IV astrocytoma, glioblastoma currently has a survival rate of just 15 to 16 months. While it usually manifests in the frontal and temporal lobes, it can appear anywhere in the brain and even the spinal cord.

There are two types of the disease: primary (or de novo), which is the most aggressive, and the less-common, slower-growing secondary form. Secondary glioblastoma affects about 10% of glioblastoma patients. This cancer usually strikes men over the age of 50 of Caucasian or Asian heritage but can occur in other demographics. Children diagnosed with glioblastoma tend to live longer than adults.

Glioblastoma tumors are notoriously difficult to treat. They grow very quickly, inject finger-like protrusions into surrounding healthy tissue and are composed of several different kinds of cells, some of which only respond to different drugs, if at all. Present forms of treatment include the surgical removal of as much of the tumor as possible, followed by radiation and chemotherapy. New technologies, including gene therapy and immunotherapy, hold promise for improved life expectancy, but are not yet in widespread use.

Along with the KAIST findings, other efforts among the global cancer research community are well underway to confront glioblastoma. A major collaborative, NFCR-supported initiative to identify drugs capable of better battling the disease is GBM AGILE. This flexible and adaptive clinical trial, managed by the Global Coalition for Adaptive Research, offers hope against the deadliest form of brain cancer.