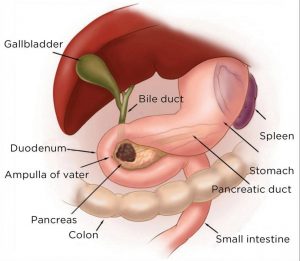 A targeted cancer drug already in use to treat some women with ovarian and breast cancer may also be beneficial for some people with advanced pancreatic cancer who have inherited mutations in the BRCA1 or BRCA2 genes, according to results from a large clinical trial.

In the clinical trial, called POLO, participants who received olaparib (Lynparza) following standard chemotherapy lived for a median of 7.4 months without their pancreatic cancer progressing (progression-free survival), compared with 3.8 months for those who received a placebo after chemotherapy. The findings were presented June 2 at the 2019 American Society of Clinical Oncology (ASCO) annual meeting.

Of the 92 patients randomly assigned to receive olaparib, only 18 (20%) had their tumors shrink partially or completely. But when responses did occur, they were relatively long lasting.

“In a fraction of these patients, we are changing the trajectory of the disease,” said Hedy Kindler, M.D., of the University of Chicago, who led the POLO trial. “The median duration of these [tumor] responses was more than 2 years, and in some of these patients it may go on even longer.”

However, to date, no improvement in overall survival has been seen in patients who received olaparib. At the time of the ASCO presentation, participants in both groups had lived for a median of about 18 months from the time they entered the trial.

The POLO researchers are still following the trial participants. But, given the preliminary results, which were published concurrently in the New England Journal of Medicine, “it seems unlikely that [in] the final analysis … there’ll be an overall survival benefit,” said Wells Messersmith, M.D., from the University of Colorado, who spoke about the POLO results in a discussion after the presentation.

Without an improvement in overall survival, “this study … will lay the groundwork for future studies, likely of combination therapies, rather than [establishing] olaparib as a standard treatment for patients with advanced pancreatic cancer who have harmful mutations in BRCA1 and BRCA2,” said Udo Rudloff, M.D., Ph.D., of NCI’s Center for Cancer Research, who was not involved in the study.

Dr. Rudloff noted that even though 20% of patients who received olaparib had a response during the trial, so did 10% of patients in the placebo group.

“Pancreatic cancer does not spontaneously regress,” Dr. Rudloff explained. “The fact that the study observed responses in the placebo group suggests that some of the effect [in the olaparib group] was likely due to the chemotherapy given previously.”

Specific inherited (germline) mutations in the BRCA1 and BRCA2 genes raise the risk of several cancer types, including breast, ovarian, and pancreatic cancer. Targeted therapies called PARP inhibitors have been approved for the treatment of some women with breast and ovarian cancers that have BRCA mutations.

PARP inhibitors block the activity of the PARP enzyme, which normally helps cells repair damaged DNA. When a cell accumulates enough DNA damage, it dies. Cancer cells with BRCA , which, studies have shown, make them especially sensitive to PARP inhibitors.

The POLO trial, which was funded by AstraZeneca, tested the PARP inhibitor olaparib as a maintenance therapy—that is, treatment that is given to help keep cancer from progressing after initial therapy.

“The goal of maintenance … in this setting was to obtain a chemotherapy-free interval during which the patients can maintain their quality of life and not need to be getting toxic chemotherapy,” explained Dr. Kindler. No maintenance therapies are currently approved for advanced pancreatic cancer.

Because of the relative rarity of germline BRCA mutations in patients with pancreatic cancer (around 4 to 7%), trial participants were recruited from 119 hospitals in 12 countries. To join the trial, they must have received at least 16 weeks of platinum-based chemotherapy without their disease progressing.

Of 247 potentially eligible patients, 43 (17%) had their cancer progress while receiving chemotherapy, before the end of those 16 weeks, and were excluded from the trial.

Participants could keep taking the drug or placebo as long as their cancer didn’t progress. During the trial, serious side effects occurred in 24% of participants who received olaparib and 15% who received placebo. Side effects led 5% of people in the olaparib group and 2% in the placebo group to stop treatment. But, overall, patients in both groups reported that their quality of life was maintained during treatment.

During the post-presentation discussion at the ASCO meeting, there was no consensus among clinicians about whether the findings would change practice. For his part, Dr. Messersmith said that, going forward, “maintenance olaparib should be an option for patients with germline BRCA mutations, although in my view, it’s very reasonable to continue platinum-based therapies [instead].”

In October 2018, olaparib was granted an orphan drug designation by the Food and Drug Administration, but it is not yet approved by the agency for the treatment of advanced pancreatic cancer.

Germline testing for patients with advanced pancreatic cancer has become more common in the last few years, said Susan Domchek, M.D., of the Basser Center for BRCA at the University of Pennsylvania. A panel test for inherited cancer-associated mutations including BRCA used to cost thousands of dollars but tests are now available for $250. Genetic testing is usually covered by insurance, she explained.

In 2018, she added, several professional organizations began recommending testing all patients with advanced pancreatic cancer for germline BRCA mutations. Her institution has already been doing this for the last 2 years.

“We sometimes use that information [on BRCA mutation status] to preferentially choose a platinum-based regimen for initial therapy,” she explained. And the results from germline testing can help find patients who qualify for clinical trials of targeted drugs, she added.

Finally, she said, germline BRCA testing has important implications for family members. “We often say in genetics that we don’t test people, we test families. And this could really be potentially life-saving information for other family members.” Although no strategies exist to help prevent pancreatic cancer, women who inherit a BRCA mutation have several available options to reduce their risk of breast and ovarian cancer. These include enhanced screening and preventive surgery.

Some hospitals have pancreatic tumor tissue samples tested for somatic mutations—non-inherited mutations that occur during someone’s lifetime, including in BRCA genes.

Dr. Domchek cautioned that the POLO results can only be applied to people with germline mutations.

“So, if you have a finding on a somatic test report that shows a BRCA mutation, I feel very, very strongly that people still need germline [testing] confirmation” before using that information to drive care and counsel family members, she explained.

The POLO trial missed some opportunities to delve into the role that PARP inhibitors might play in treating germline BRCA mutation–positive pancreatic cancer, said Dr. Rudloff. For one, it included some patients with BRCA mutations that were not confirmed to be harmful, he explained. This could have reduced the potential effectiveness of the treatment.

The trial also allowed a shorter course of chemotherapy than is standard: 4 months instead of 6 months. The POLO investigators noted that people who had the longest duration of chemotherapy also had the best odds of longer survival.

However, researchers are now more interested in combining PARP inhibitors with immunotherapies for pancreatic and other cancers with defects in DNA repair, explained Dr. Rudloff.

The thinking behind this approach, he explained, is that when the PARP inhibitors kill cancer cells, the proteins released by the dead cells can then be recognized as threats by the immune system. This could potentially allow immune cells primed for activity by immune checkpoint inhibitors to more easily recognize and kill pancreatic cancer cells. To date, immunotherapies given alone have not been effective in pancreatic cancer.

“We don’t want to be content with another 3 or 4 months of progression-free survival. We want durable responses, durable disease control, measured in years or longer,” Dr. Rudloff said. “Immunotherapy is probably the most exciting way [towards this goal] at the moment.”