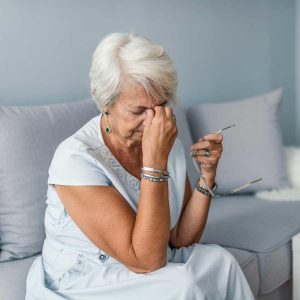 It’s not unusual for cancer survivors to report problems with memory, attention, learning, and processing of information months or even years after completing treatment. Scientists are just beginning to understand why some people are particularly susceptible to these cognitive difficulties, which patients often call chemobrain or chemofog.

The clinical study results point to the role of the E4 version (or E4 allele) of the APOE gene, which is a risk factor for late-onset Alzheimer’s disease. In the study, published October 3 in the Journal of Clinical Oncology, older women with breast cancer who were treated with chemotherapy and were carriers of the E4 allele were more likely to have cognitive problems Exit Disclaimerthan women without cancer who were also carriers of the E4 allele.

The results also suggest, but do not definitively prove, that older women with breast cancer who carried the E4 allele were more likely to have cognitive problems after chemotherapy than women without the allele or those receiving only hormonal therapy.

In the second study, researchers described the development of an APOE mouse model of cancer-related cognitive problems. The study showed that the mice developed chemotherapy-related changes in spatial learning and memory as well as physical changes in brain regions involved in those functions. Learning and memory problems are commonly reported in human studies of cancer-related cognitive decline and Alzheimer’s disease. The mouse study was published October 4 in Neurotoxicity Research.

Although other studies have shown evidence of a link between the E4 allele of APOE and cognitive problems after chemotherapy in cancer survivors, “our study is the only large study to investigate this link in older cancer patients,” said Jeanne Mandelblatt, M.D., M.P.H., a geriatrician at the Lombardi Comprehensive Cancer Center at Georgetown University Medical Center (GUMC) and lead author of the clinical study. William Rebeck, Ph.D., a neuroscientist at GUMC, led the mouse study, which he did in collaboration with Dr. Mandelblatt and other GUMC colleagues.

“These results are very exciting for furthering our understanding of who may be susceptible to cancer-related cognitive problems and may provide insight into some of the mechanisms involved,” said Michelle Janelsins, Ph.D., M.P.H., of the University of Rochester’s Wilmot Cancer Institute, who studies cancer-related cognitive difficulties but was not involved with the two new studies.

However, before these results can be used to inform clinical practice, the research findings from this genetic study need to be confirmed with additional studies with a larger number of patients who have the E4 allele and receive chemotherapy, Dr. Janelsins said.

The E4 allele of APOE is only present in about 25% of the US population, and fewer than 30% of older women receive chemotherapy for their breast cancers, explained Dr. Mandelblatt.

As part of the ongoing multicenter Thinking and Living With Cancer (TLC) study, Dr. Mandelblatt and her colleagues monitored cognitive function in 344 women ages 60–98 years old who were newly diagnosed with nonmetastatic breast cancer and a matched group of 347 women without cancer (controls). Recruitment of participants into the study is ongoing.

Using a battery of tests, the researchers assessed cognitive function in the women when they entered the study (before treatment, in the women with cancer) and after 12 and 24 months. They also tracked self-reported cognitive problems in the two groups.

The researchers next tested whether the presence of the E4 allele of APOE was related to the way a woman’s cognitive score changed over time. They found that older survivors who received chemotherapy and had one or two copies of the E4 allele tended to show greater cognitive decline in the first 2 years after diagnosis and treatment than women without cancer (controls) who had the allele.

In addition, when the team looked specifically at women who received chemotherapy, they found that older survivors exposed to chemotherapy showed a greater decline in cognitive scores than other groups in areas such as attention and processing speed, and this effect was largely confined to those with the E4 allele.

However, because the number of women who had the E4 allele and received chemotherapy was small, Dr. Mandelblatt noted that the link between the E4 allele, chemotherapy, and cognitive decline in this study is not definitive.

“We now have about double the numbers of patients enrolled in the TLC study and are continuing to follow the women for up to 5 years, so I suspect that in our later analysis we will be able to see whether there is a clinically meaningful association between the E4 allele and chemotherapy-related cognitive decline,” she said.

The finding that only a small number of older survivors in the TLC study had cognitive changes is consistent with results from other studies and “should be reassuring to survivors overall,” Dr. Janelsins said.

Dr. Mandelblatt partnered with Dr. Rebeck, whose lab studies the link between APOE and Alzheimer’s disease, to test a mouse model that they hoped could be used to study the interactions of the E4 allele with chemotherapy.

The team used female mice that were genetically engineered to lack the mouse APOE gene (and the corresponding protein) and instead have two copies of either the human E3 or E4 allele of APOE.

Researchers treated some of the mice with a single dose of the chemotherapy drug doxorubicin, which is commonly used to treat breast cancer, and tested their performance before and after treatment on tasks that involve learning and memory. They also looked for brain changes in the mice using magnetic resonance imaging (MRI).

Although other researchers, including Dr. Janelsins, have developed mouse models of cancer-related cognitive problems, “this is one of the first models I’m aware of that’s looking at the role of E4 in cancer-related cognitive impairment,” Dr. Janelsins said. “The fact that this study showed reductions in brain volumes in some key areas of the brain that are relevant to the human condition makes it potentially a practical and important model for use in future studies.”

Drs. Mandelblatt and Rebeck said their mouse model will allow them to address questions that can’t easily be addressed in human studies, such as whether chemotherapy-related cognitive changes in patients with cancer are due to a single drug or a combination of drugs, or whether one type of drug is more likely than another to cause cognitive changes.

Furthermore, Dr. Rebeck said, “with a mouse model that allows us to show how genetics and chemotherapy interact to cause cognitive problems, we can start talking about, and testing, ways to alleviate or even prevent those problems.”

Although most women in the TLC study did not experience cancer-related cognitive problems within the first 2 years after diagnosis and treatment, “it’s important for patients to report any symptoms that they’re worried about, such as memory problems and problems organizing tasks, and for their doctors to know that cognitive problems can occur,” Dr. Mandelblatt said.

Indeed, Dr. Janelsins said, “As we’re learning more about cancer-related cognitive impairment and about the potential genetic and biologic risk factors, it’s becoming more important to monitor cognitive functioning…even before starting cancer treatment, in addition to during treatment and into survivorship.”

“If we extend and confirm this finding, both in the mouse model and in the longer-term follow-up in our TLC study, older women might want to have APOE testing if chemotherapy is not clearly indicated for them and they have other medical conditions that could make chemotherapy more problematic,” Dr. Mandelblatt said.

Patients at risk of cognitive problems could be counseled to use approaches such as brain training, computer games, yoga, and physical activity, which studies suggest may improve cognitive function in cancer survivors, she added.