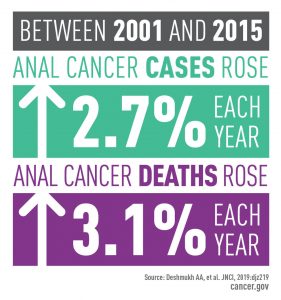 Trends in a Rare Cancer

Cancer death data for the corresponding period came from the National Center for Health Statistics. The researchers also looked at changes in incidence over time among groups defined by sex, race, age, and year of birth.

Two types, HPV16 and HPV18, are responsible for most HPV-caused cancers. Even if someone is infected with one of these viruses, though, the immune system can usually eliminate the infection. But in some people, the infection persists, and infected cells eventually become cancerous. This risk that an infection will persist is higher in people with weaker immune systems, including older adults and people living with HIV.

To improve HPV vaccination rates, better communication between health care professionals, people eligible for the vaccine, and their families is crucial, said Dr. Deshmukh. Those discussions should be driven by the CDC’s most recent recommendations on HPV vaccination.

People often think that these symptoms must be caused by hemorrhoids and can be ignored, added Dr. Dao. And while that’s a likely explanation, “a few times we’ve found very advanced cancers that could have been caught earlier,” he said.