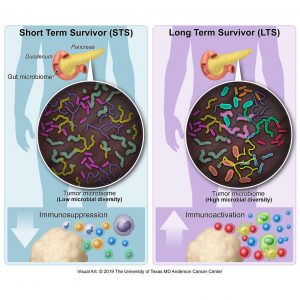 Many cancer studies focus on the genetic changes in a tumor that may influence its development or identify potential targets for new treatments. But a growing number of researchers have been looking into a different factor that might affect how tumors behave: bacteria.

Several studies have suggested that the mix of bacteria in the gut of people with cancer—their gut microbiome—can affect their immune system’s ability to recognize and attack tumors or the effectiveness of some cancer treatments. Now, results from a new study suggest that, in the case of people with pancreatic cancer, the makeup of bacteria that populate their tumors could predict how long they live.

Experiments in mice conducted as part of the study also pointed to the possibility that fecal transplants—which are primarily used to treat people with a serious infection with a particular type of bacteria—might have potential as a way to treat pancreatic cancer.

Findings from the NCI-supported study, led by researchers at the University of Texas MD Anderson Cancer Center and Johns Hopkins Kimmel Cancer Center, were published August 7 in Cell.

Based on the results, an early-stage clinical trial is being planned to test fecal transplants in people with pancreatic cancer.

While the study’s findings are encouraging, said the study’s lead investigator, Florencia McAllister, M.D., of MD Anderson’s Department of Clinical Cancer Prevention, she cautioned that it’s still too early to say what will come of them.

At the same time, Dr. McAllister added, the findings point to wide-ranging possibilities for altering the tumor microbiome in people with this highly fatal form of cancer. “I think it’s something that could have an impact on any strategy that’s being thought about for pancreatic cancer treatment,” she said.

Mounting evidence shows that there is a complex relationship between the microbes in a person’s body—primarily those in the gastrointestinal tract, or gut, where the majority of the bacteria in the body reside—and the formation and development of cancer.

Dr. McAllister and her colleagues, which also included researchers from Texas Southern University and the Weizmann Institute of Science in Israel, wanted to look more closely at the microbiome in people with pancreatic cancer—in particular, the bacteria in their tumors—and whether it might be a factor in the poor prognosis of people diagnosed with the disease. To do so, they turned to the rare group of people diagnosed with pancreatic cancer who live for a long period.

The study, the research team wrote, builds on data from other recent studies of long-term survivors of pancreatic cancer.

One study, for instance, failed to find differences in mutations found in common cancer-associated genes that might potentially account for why some people live longer. And another identified the same proteins on tumor cells that can induce an immune response as those that are produced in response to bacterial infections.

According to Laura Wood, M.D., Ph.D., a member of the research team from Johns Hopkins, these latter findings suggest a scenario where, absent any noteworthy genetic differences between the tumors in long- and short-term survivors, perhaps there is a bacterial component at play.

In long-term survivors, Dr. Wood said, maybe “their immune systems are already primed by [their microbiome] to respond to tumors.”

In the MD Anderson group, they were also able to identify a “bacterial signature”—a group of bacteria that, when collectively present at high levels, could predict which patients had been long-term survivors. As with the bacterial diversity finding, the same signature was seen in long-term survivors from the Hopkins group.

And, consistent with the idea that the microbiome was exerting its effect by influencing the immune response, tumors of long-term survivors also tended to have much higher numbers of cell-killing T cells than tumors in short-term survivors.

Analysis of stool and tissue samples collected from three long-term survivors in the MD Anderson cohort revealed something else: There were no similarities between the bacterial communities seen in healthy tissue near pancreatic tumors and those present in the gut. But approximately one-fifth of the bacterial species in tumors were also present in the gut.
The finding, the research team wrote, suggests a bacterial migration from the gut to the tumor.

If bacteria can migrate from the gut to the pancreas, Dr. McAllister said, that raises the question of whether it’s possible to alter the microbiome of pancreatic tumors so that they resemble those of long-term survivors.

To begin to answer that question, the research team tested fecal transplants in mice. In humans, fecal transplants have cured gastrointestinal tract infections with the bacteria C. difficile that won’t respond to existing antibiotics. The transplants, which come from healthy donors, introduce a new community of bacteria into the patient’s gut that, through mechanisms that aren’t well understood, resolve the C. difficile infection.

The team began by eliminating as much of the existing microbiomes as possible in tumor-free mice by treating them with antibiotics. The mice then underwent fecal transplants using fecal material not from other mice, but from one of three groups of people: those currently being treated for advanced pancreatic cancer, long-term survivors who had no evidence of cancer, and healthy volunteers. Finally, the mice were implanted with tumor cells taken from mice engineered to develop pancreatic cancer.

When the researchers assessed the mice 5 weeks later, they found that the tumors were largest in mice that received a fecal transplant from patients with active cancer and smallest in mice that received fecal transplants from long-term survivors. Transplants from healthy volunteers also slowed tumor growth, but not to the same extent as those from long-term survivors.

The researchers also found that tumors in mice given fecal transplants from the long-term survivors had more cell-killing T cells in and around their tumors, whereas tumors in mice that received transplants from people with advanced pancreatic cancer had higher levels of a type of immune cell that holds back an immune response.

William Hawkins, M.D., who directs the NCI-funded Specialized Program of Research Excellence for pancreatic cancer at Siteman Cancer Center in St. Louis, called the study’s findings promising. But he cautioned that there is still much more to learn.

Given all that’s been unearthed about the affect of a person’s microbiome on their health, Dr. Hawkins said he wasn’t surprised to see an association between certain bacteria in the tumor and survival.

“But you have to ask the question: Is it causative, is it an effect, or is it somewhere in between?”

Regardless of what role the bacterial communities in a tumor play, Dr. Wood pointed to the potential of using the bacterial signature found in the study as a biomarker of expected survival. Although it needs to be validated in other studies, she stressed, “I think that has potentially clinical utility in and of itself.”

As for fecal transplants, this new study is not the first to investigate their potential role in cancer treatment.

The early-phase clinical trial at MD Anderson will use fecal material from healthy donors, Dr. McAllister explained. Because it’s an

early-phase trial, she stressed, it’s primarily focused on the safety of the treatment and better understanding whether some of the tumor microbiome and immune changes seen in preclinical studies also occur in humans.

That a fecal transplant could influence the immune system in humans in some way would not be a surprise, Dr. Hawkins noted. “But is it going to … turn some patient’s tumor from an immunologically ‘cold’ tumor to a ‘hot’ tumor and help cure them? We’re still some way away from knowing that,” he said.