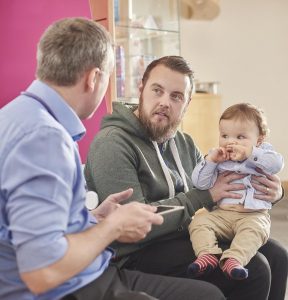 Finding new ways to help people quit smoking continues to be a challenge. In a recent study, researchers tried a unique approach: training pediatricians’ offices to provide smoking cessation treatment to parents during visits with their child’s doctor. The approach increased the number of people who got treatment and modestly improved smoking quit rates.

The study tested the effectiveness of a program called CEASE, which aims to reduce children’s exposure to secondhand smoke—and thereby improve their health—by helping parents to quit.

Results of the trial were published August 12 in JAMA Pediatrics.

“We’ve made a lot of progress [in reducing secondhand smoke exposure] in public spaces, but the home is still a place where people, especially children, are exposed to secondhand smoke,” said Yvonne Prutzman, Ph.D., M.P.H., of NCI’s Tobacco Control Research Branch, which funded the study.

Indeed, a new report from the Centers for Disease Control and Prevention (CDC) shows that during 2013–2016, 38% of US children ages 3–11 were exposed to secondhand smoke from tobacco products, as measured by a blood marker of nicotine exposure called cotinine. Exposure to secondhand smoke was more common among children from lower-income families, the CDC found.

“Parental tobacco use harms the health of the parent and of the child, and [in low-income families] worsens the cycle of poverty,” said Jonathan Winickoff, M.D., M.P.H., of Massachusetts General Hospital for Children, who designed the CEASE program and is the CEASE study’s principal investigator.

“We have evidence-based treatments that can help people quit smoking, but those treatments are underutilized,” Dr. Prutzman said. “And so, when people do try to quit, they often fail because they’re not using the optimal treatments.”

Targeting this age group of smokers in this setting also makes sense, she added.

“Programs like this are a way to intervene with adults while they are still young and are likely to be motivated to quit because they want to protect their children,” she said.

CEASE was created after earlier research by Dr. Winickoff and his colleagues showed that parents might be willing to accept help with quitting from their child’s pediatrician. “We wanted [to develop] a simple system that would deliver help to parents in a routine and effective manner and wouldn’t involve a lot of the pediatrician’s time,” Dr. Winickoff said.

Ten pediatrics practices took part in the clinical trial of CEASE. They were in five states—North Carolina, Tennessee, Virginia, Ohio, and Indiana—in areas where smoking rates are high and in which access to evidence-based smoking cessation treatment has been poor, Dr. Winickoff said.

When a parent in an intervention practice reported smoking or having a household member who currently smoked tobacco, the parent received prescriptions for FDA-approved nicotine replacement therapy, such as nicotine patches or gum; the option to enroll in their state’s free tobacco cessation quitline; and information about the NCI-developed cessation text messaging program SmokefreeTXT. In the control practices, parents who smoked were not automatically offered a set of smoking cessation options.

Parents in the intervention practices also watched short videos on the computer tablets. These videos, which were specific to each state and designed to be culturally appropriate to each practice’s local population, were like “commercials to motivate behavior change,” and were well received by parents, Dr. Winickoff said.

Participating pediatricians were trained in ways to help interested smokers quit and received monthly reports from the study team “to enhance documentation of parental smoking, confirm that requests for assistance were fulfilled, and foster follow-up with individuals who smoked,” the study authors wrote.

“Modest but Noteworthy” Reductions in Smoking

A total of 8,184 parents participated in a survey conducted by research assistants after their child’s visit. Of these, 961 (27.1%) in the intervention practices and 1,103 (23.9%) in the control practices were identified as currently smoking. Among smokers, 364 parents in the intervention practices and only 1 in the control practices received meaningful smoking cessation treatment (defined as prescription of nicotine replacement therapy or quitline enrollment).

At the end of the 2-year study period, the smoking rate had declined by 2.7% among all the parents (not just those receiving treatment) in the intervention practices—that is, a 10% decrease in parents who smoke. By contrast, the smoking rate had gone up by 1.1% among parents in the control practices. The researchers confirmed that people had quit smoking by measuring cotinine levels in saliva samples.

“The modest reductions the study achieved are noteworthy because of the quality and size of the study, the use of a biomarker to confirm quit rates, and the direct involvement of practice staff in the intervention,” wrote Peter Belamarich, M.D., and Andrew Racine, M.D., Ph.D., of Albert Einstein College of Medicine, in an editorial accompanying the new study.

And, Dr. Winickoff said, “Even a small decrease in smoking yields a big public health impact.”

He believes one reason the CEASE program was able to reduce smoking rates is that it offered parents several different options that they could use to help them quit. Having multiple options was helpful because people’s preferred methods for quitting vary.

Another reason, he said, is that parents were screened and offered help with smoking cessation each time they brought their child to the pediatrician’s office for a visit—which is four times per year, on average. And at each visit, parents were shown a different short video on the tablet, “to keep the message fresh” and try to appeal to people who previously had not accepted help with quitting, Dr. Winickoff said.

“It can be hard to take that first step toward quitting. And nicotine addiction is very hard to overcome, so most smokers require multiple quit attempts over their lifetime,” Dr. Prutzman said. “That’s one reason that repeated prompts to help smokers take that step to quit are important,” she said.

In their editorial, Drs. Belamarich and Racine raised concerns about the feasibility and cost effectiveness of implementing CEASE more widely. They noted that many pediatricians already feel overburdened at well-child visits and, thus, don’t have time to counsel parents on smoking cessation.

The editorialists went on to write, “Is the approach advocated by the CEASE trial worthwhile for some practices to consider? Undeniably so.” However, they suggested, “other approaches should be entertained to address the issue of secondhand smoke exposure that do not rely on enlisting the primary care pediatrician as a first-line intervention.”

“But there’s [also] a need for innovative ways to connect smokers with evidence-based treatment,” she continued. “One area of innovation right now is finding ways to disseminate smoking cessation treatments to places where smokers will have access to them”—including health systems. And “for a lot of adults, especially those with low incomes, the pediatrician might be their main contact with the health care system,” she said.

Although many pediatricians would like to help parents quit, they have not had effective tools and strategies to do so in the context of a busy medical practice and limited time with each family, Dr. Winickoff said.

“Now, instead of blaming and shaming parents [for smoking], doctors have something that can realistically be offered each time a parent brings their child to the office.”

CEASE is now being used more widely in North Carolina and Indiana, he said, and his team is continuing efforts to improve the program as well as assess its cost-effectiveness.

“There’s nothing about this program that is set in stone,” Dr. Winickoff concluded. “We’re always trying to improve it. Our hope is that more and more practices and states will use this strategy to help parents quit smoking.”