February is Gallbladder and Bile Duct Cancer Awareness Month. Although rare, these cancers affect thousands of people and their families around the world each year. It’s estimated that nearly 12,000 individuals will be diagnosed with gallbladder cancer in 2020, while approximately 8,000 people will be impacted by bile duct cancer. Learn the signs and symptoms associated with these serious illnesses and find out what steps you can take to help reduce your risk and live a healthier life.

A Small Organ with Big Responsibilities

The gallbladder is a small, pear-shaped organ located under the liver. Its primary job is to store bile, a substance that aids in the digestion of fat. Gallbladder cancer occurs when cancerous cells are present in the organ. Certain factors that can increase an individual’s risk for gallbladder cancer, include:

Treatment for the disease depends on the type and stage of the cancer, but usually includes a combination of surgery, radiation therapy, and chemotherapy.

A Rare, But Devastating Illness

Bile duct cancer is more rare than gallbladder cancer, and can affect any of the ducts (tubes) that connect the liver, gallbladder, and small intestine. The National Cancer Institute categorizes bile duct cancer based on where the cancer forms in the body:

According to the American Cancer Society, bile duct cancer is more common among individuals living in southeast Asia. Other risk factors for the disease include:

Because the disease usually is not diagnosed until after it has spread to other areas of the body, treatment often includes a combination of surgery, radiation therapy, and chemotherapy. 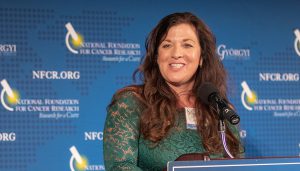 No one knows this better than bile duct cancer survivor Melinda Bacchini. In 2009 at age 41, she was diagnosed with bile duct cancer, and despite surgery, the cancer spread and she was deemed Stage IV terminal.

As a mother of six children, Melinda clung to hope. She enrolled in a unique and very successful immunotherapy clinical trial led by Dr. Steven Rosenberg—NFCR’s winner of the 2019 Szent-Györgyi Prize for Progress in Cancer Research. Melinda attributes her survival to this opportunity and overall to cancer research, and the organizations and individuals who support it.