Surgery for Recurrent Ovarian Cancer Does Not Improve Survival 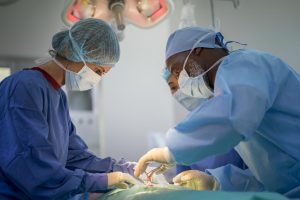 Doctors have long thought that women fare better if surgeons remove as much recurrent ovarian cancer as possible.
Credit: iStock

In women with ovarian cancer that has come back after initial treatment, physicians recommend additional surgery in some cases to remove as much of the cancer as possible before starting chemotherapy treatment again. Yet rigorous evidence to support this practice has not been available.

Now, results of a large NCI-sponsored clinical trial, GOG-0213, show that this secondary surgery does not improve how long patients with recurrent ovarian cancer live. Indeed, the findings suggest that women who have additional surgery may fare worse than those who do not.

“These highly anticipated results call into question our standard practice,” said Yovanni Casablanca, M.D., a gynecologic oncologist and surgeon at Walter Reed National Military Medical Center who was not involved with the trial.

“This is a well-designed study … and should be practice changing,” agreed Elise Kohn, M.D., head of Gynecologic Cancer Therapeutics in NCI’s Cancer Therapy Evaluation Program, which supported the study.

Results of the trial, which was led by the Gynecologic Oncology Group (now part of NRG Oncology), were published November 14 in the New England Journal of Medicine.

Study Is First to Rigorously Test Whether Secondary Surgery Is Beneficial

Ovarian cancer often is at an advanced stage by the time it is diagnosed. And the cancer comes back, or recurs, after treatment in more than 80% of women with the disease.

Most women newly diagnosed with ovarian cancer have initial surgery first to remove as much of the tumor as possible, usually followed by chemotherapy. Data from and since the 1970s consistently suggested that the less cancer that remains after surgery, the better patients do, Dr. Kohn said.

“For four decades, doctors have thought that we can also improve outcomes in women with recurrent disease if we operate” to remove as much recurrent cancer as possible, said Robert Coleman, M.D., of the University of Texas MD Anderson Cancer Center, who led the trial.

“There have been several theoretical and scientific explanations for doing surgery before chemotherapy,” Dr. Casablanca said. For example, she said, if surgery can remove all or most of the cancer that came back, “then that second round of chemotherapy would have to treat a smaller volume of disease.”

In addition, she continued, it was thought that surgery might be able to remove some tumor tissue that is resistant to chemotherapy.

However, Dr. Kohn said, “until this study, nobody had prospectively tested the benefit of secondary surgery” in a rigorous clinical trial.

Trial Enrolled Patients Thought Most Likely to Benefit from Surgery

Patients with these characteristics were thought to be the most likely to benefit from a second surgery, Dr. Coleman said.

Surgeons were able to completely remove visible disease in 67% of the 225 patients assigned to surgery who underwent the procedure.

Although trial participants who underwent secondary surgery reported that their quality of life decreased immediately after surgery, quality of life in the surgery and no-surgery groups was similar after recovery from surgery.

Another component of the GOG-0213 trial tested the effectiveness of adding bevacizumab to standard chemotherapy in patients who were not considered good candidates for surgery. Results of that part of the trial, which showed that bevacizumab modestly improved overall and progression-free survival, were published in 2017. Genentech, which manufactures bevacizumab, also provided support for the trial under a Cooperative Research and Development Agreement with NCI.

When researchers designed the trial, more than 10 years ago, they expected to see a survival benefit from surgery, Dr. Coleman said.

“The major question that has come up since the initial results [of the trial] were available is whether there were any subgroups for whom surgery provides a benefit,” he continued.

To investigate this possibility, the team compared only those patients for whom surgery removed all visible tumor, as reported by the surgeon, with the no-surgery group. But, Dr. Coleman said, “even [in] cherry picking the best of the best [secondary surgery] cases we still did not see an increase in overall survival.”

Another surprise was that participants in the trial lived nearly three times longer than had been expected when the trial was designed. “The precise reasons for this are unknown but are probably related to improvements in clinical care and the availability of more effective [nonsurgical] treatments,” the investigators wrote.

The results of the trial demonstrate that progression-free survival may be prolonged for a few months by surgery, Dr. Coleman said, “but [non-surgical] therapy for recurrent ovarian cancer has gotten so good that it likely erases any kind of marginal benefit that surgery could have provided.”

What Is Most Important to Patients?

All in all, Dr. Kohn emphasized, the trial results show that physicians should be “extremely cautious” about which women with recurrent ovarian cancer they recommend have surgery.

“I think this is going to cause a lot of surgeons to reassess what they are telling their patients about the benefits of surgery,” Dr. Casablanca echoed.

A few other ongoing phase 3 trials are comparing surgery and chemotherapy with surgery alone for recurrent ovarian cancer. One trial in Europe, known as DESKTOP III, has a similar but not identical design to GOG-0213.

However, the design of GOG-0213 “was far closer to how things are done in a real-world setting in the United States,” Dr. Kohn said. For that reason, she said, she believes the results of the GOG-0213 trial should lead to an immediate change in practice.

“When you do these trials, you might be able to find a better outcome with surgery, such as improved progression-free survival, but when you ask patients what’s most important to them, they want to know what’s going to help them live longer overall,” Dr. Casablanca said. “And I don’t think we have much evidence now to say secondary surgery does that.”