Pembrolizumab Approved for Some Patients with Advanced Esophageal Cancer 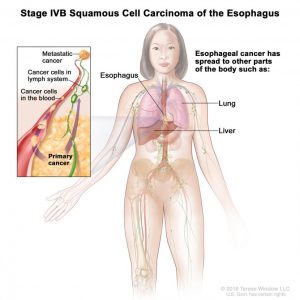 In stage IVB esophageal cancer, the cancer has spread to other parts of the body, such as the lungs and liver. Credit: National Cancer Institute

The Food and Drug Administration (FDA) has approved the immunotherapy drug pembrolizumab (Keytruda) to treat some patients with advanced esophageal cancer.

The treatment was approved for patients with locally advanced or metastatic squamous cell carcinoma of the esophagus (ESCC) that has progressed after treatment with one or more lines of standard therapy. To receive the treatment, patients must have certain levels of the protein PD-L1 in their tumors, as determined by an FDA-approved test. FDA also approved the use of the PD-L1 IHC 22C3 pharmDx test as a companion diagnostic for this indication.

FDA previously approved pembrolizumab for patients with advanced gastric or gastroesophageal junction cancer that has progressed despite two or more lines of standard treatment, and that approval was in conjunction with the same PD-L1 test. In that approval, patients were required to have tumors that expressed relatively modest levels of PD-L1 (a combined positive score of 1 or greater). For the approval for esophageal cancer, patients must have tumors with much higher PD-L1 expression (a score of 10 or greater).

Although this new approval was expected, “it’s an important advance,” said Carmen Allegra, M.D., head of GI cancer therapeutics in NCI’s Division of Cancer Treatment and Diagnosis. “The approval provides another agent for patients who have a disease with poor outcomes, and it has significant clinical benefit for some patients.”

“I think having pembrolizumab as a new option broadens the horizon,” he said. “It means we will be able to offer more treatment to patients outside of a clinical trial.”

Chemotherapy, the standard second-line therapy for people with advanced esophageal cancer, has limited benefit for many patients and can come with significant side effects, explained Dr. Mukherjee.

And there are few treatment options for patients with advanced esophageal cancer that has progressed after standard therapy, he said. He added that one reason for this may be that there has been limited progress in finding molecular alterations in tumors that might make good targets for treatment.

In an effort to expand treatment options, researchers have been investigating whether immunotherapy might provide a potential option for people with advanced esophageal cancer. Pembrolizumab, an immune checkpoint inhibitor that blocks the activity of the PD-L1 protein on tumor cells, has already been approved for many types of cancer.

Approval Based on Results from Two Clinical Trials

The new approval was based on two clinical trials, both sponsored by the drug’s manufacturer, Merck. In KEYNOTE-181, a phase 3 trial, 628 patients whose advanced esophageal cancer had progressed on or after one line of treatment were randomly assigned to receive either pembrolizumab or the treating clinician’s choice of three different chemotherapy regimens.

KEYNOTE-180 was a phase 2 clinical trial that enrolled 121 patients with advanced, metastatic esophageal cancer that had progressed after two or more lines of standard therapy. All patients in the trial received pembrolizumab.

Common side effects in both trials for patients taking pembrolizumab included fatigue, rash, nausea, and diarrhea. When results of KEYNOTE-180 were published in December 2018, the researchers reported that 15 patients had treatment-related grade 3 to 5 adverse events, five patients discontinued treatment, and there was one treatment-related death from pneumonitis.

Dr. Allegra noted that even though the proportion of patients in both trials who responded to the treatment was about 20%, for those whose cancers did respond, that response was often relatively long-lasting.

“This is what distinguishes the immunotherapy agents from the chemotherapy agents,” he said. “It’s the durability of the agent, which is pretty amazing.”

Dr. Mukherjee stressed the importance of validating the PD-L1 cutoff in the KEYNOTE-181 trial. “So now we can look at the [PD-L1] score and tell our patients whether they’re likely to benefit more from pembrolizumab than chemotherapy,” he said.

The fact that the new approval is for use as a second-line therapy will be beneficial for patients, Dr. Allegra explained.

“This moves the agent up to earlier in the course of the disease, which is always a good thing for the patient,” he said, “because if they are going to benefit, it’s best to have that happen as early as possible.”

Testing immunotherapy in patients who don’t have advanced disease continues to be an active area of research.

In one NCI-supported clinical trial, for example, researchers are studying a combination of the immunotherapy drugs nivolumab (Opdivo) and ipilimumab (Yervoy) with standard chemotherapy and radiation in patients with esophageal cancer who are undergoing surgery.

They are testing whether giving the treatments both before and after surgery, when the cancer is still localized to the esophagus, might better prevent it from returning, Dr. Allegra said.

And another NCI-supported trial is comparing conventional photon radiation treatment with proton beam radiation therapy for patients with any stage of esophageal cancer.

Findings from another trial, KEYNOTE-062, presented at this year’s American Society of Clinical Oncology annual meeting, showed that pembrolizumab benefitted patients with gastric or gastroesophageal junction cancer with a higher PD-L1 expression as an initial, or first-line, therapy, Dr. Mukherjee said.

Although these are early findings, he added, “this trial overall gave us some signals to say that there are patients who may benefit more from immunotherapy, even in the first-line setting.”

The trials reflect a trend toward greater testing of immunotherapy as a treatment for esophageal cancer, Dr. Allegra said. “They’re clearly active agents,” he added, “so if we could use them sooner in patients who are potentially curable, we might be able to cure more patients.”