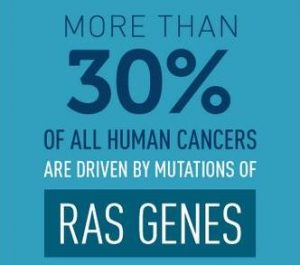 After decades of trying, in 2013 scientists developed a breakthrough drug that targets one of the most hard-to-hit cancer-related proteins, called KRAS. Now results on the first KRAS inhibitor to enter a clinical trial have been released and, so far, look promising.

The experimental drug, AMG 510, specifically targets a mutated form of KRAS called G12C. About a third of all cancers are driven by harmful mutations in the RAS family of genes. The KRAS G12C mutation is found in approximately 13% of people with lung cancer, 3% of those with colorectal cancer, and 1% to 3% of people with other solid tumors.

That translates to tens of thousands of people diagnosed with cancer each year, said one of the trial’s investigators, Greg Durm, M.D., of the Indiana University School of Medicine.

In mouse models of human cancer, the treatment completely shrank tumors and, in some cases, led to long-lasting cures. And, based on preliminary data from a small number of patients, AMG 510 appeared to be safe and to have activity against different types of tumors with a KRAS G12C mutation.

Mutant KRAS proteins were once considered “undruggable” because conventional approaches to blocking enzymes wouldn’t work for KRAS. That view recently began to change as advances in technology and drug discovery techniques revealed a new way to target the protein.

Early results from the clinical trial, published October 30 in Nature, are “extremely exciting,” Dr. Durm said. KRAS is “something we’ve been working to target for decades, and we finally have something that looks not only tolerable, but also effective,” he added.

The percentage of patients whose cancer shrank or disappeared after AMG 510 treatment was “very high for a new drug, and that’s why everyone is so excited about it,” said another of the trial’s investigators, Gerald Falchook, M.D., of Sarah Cannon Research Institute in Denver, Colorado.

A Direct Approach to Drugging KRAS

In the past, the main approach had been to indirectly attack KRAS by blocking proteins that it interacts with or by preventing it from getting where it needs to go in cells. These indirect approaches haven’t been very successful, however.

AMG 510 and other new drugs, on the other hand, directly target the mutant protein.
In healthy cells, KRAS acts like a molecular switch, cycling between an “on” and “off” state to control cell growth and survival. The G12C mutant spends more time than normal in the “on” state, accelerating cell growth. AMG 510 and other new KRAS inhibitors permanently lock KRAS G12C in its “off” state.

This direct targeting approach was made possible by a new technique for discovering drugs (known as “tethering”) and a better understanding of the structure of KRAS G12C, explained Kevan Shokat, Ph.D., of the University of California, San Francisco. He led the first study showing that KRAS G12C could be directly drugged but was not involved in the AMG 510 study.

This direct targeting approach “started as a clever way to attack this undruggable protein, but now people realize it’s not just that. It may actually benefit patients, which I’m thrilled about,” said Dr. Shokat, who is also a founder and stockholder of Araxes Pharma LLC, a company that develops KRAS inhibitors.

Because these new drugs work by interacting with the mutated part of KRAS, they should affect only cancer cells and not healthy cells, Dr. Shokat explained.

For the new study, scientists at Amgen, Inc., started by searching for ways to improve an older drug that blocks KRAS G12C. They designed AMG 510, which was ten times more potent than the original drug.

AMG 510 killed several different types of cancer cells that harbored a KRAS G12C mutation, but not cells that lacked the mutation, the researchers found.

In mice implanted with human KRAS G12C-mutant colorectal cancer cells, treatment with AMG 510 caused the tumors to nearly disappear. A higher dose of the drug led to long-term cures for 80% of mice with intact immune systems.

AMG 510 also worked well in combination with other drugs. Some combinations—including with a chemotherapy drug and a targeted therapy —were synergistic, meaning the drugs had an enhanced effect that was more than just additive.

AMG 510 also showed synergy with an immunotherapy drug that blocks PD-1, a protein found on immune cells. The drug is part of a class of therapies known as immune checkpoint inhibitors, which are approved to treat a long list of cancer types.

Mice with KRAS G12C-mutant colon tumors were rarely cured by low doses of AMG 510 or the checkpoint inhibitor alone, but the combination led to long-lasting cures in 90% of the treated mice, the researchers found.

The First Clinical Trial of AMG 510

Encouraged by the results of the mouse studies, the researchers launched the first-ever clinical trial of AMG 510 in people with advanced cancer that has a KRAS G12C mutation. The trial is funded by Amgen, Inc., the manufacturer of AMG 510.

Findings from the first four patients treated with AMG 510, reported in Nature, showed that the treatment partially shrank tumors (partial response) in two participants and prevented further tumor growth (stable disease) in the others. All four participants had non-small cell lung cancer (NSCLC).

Data from a larger group of patients with NSCLC were presented at the 2019 World Conference on Lung Cancer in September. Of the 13 patients who received what the researchers determined to be the optimal dose of AMG 510, 7 had a partial response and 6 had stable disease.

Additional data from the trial were presented in late September at the European Society of Medical Oncology 2019 Congress. Among 19 people with colorectal cancer who were treated with AMG 510, 14 had stable disease and 5 had cancer progressionExit Disclaimer.

It’s not yet clear how long patients typically respond to the treatment, Dr. Falchook pointed out. “Most patients who have responded are still on treatment … so we don’t know yet what the median duration of response is,” he said.

Although any person with KRAS G12C-mutant tumors can potentially enroll in the trial of AMG 510, the mutation is most common in NSCLC and colorectal cancer. Standard tumor genetic tests can pick up a KRAS G12C mutation, Dr. Falchook noted, pointing out that the use of these tests is considered standard of care for people with advanced cancer.

Of the patients treated thus far, approximately half experienced a treatment-related side effect and less than 10% of patients reported severe side effects, including anemia and diarrhea. Thus far, no side effects that required a reduction in dose have been reported.

Even when higher doses of the drug were given, “we saw very minimal toxicity,” Dr. Falchook noted.

While there is already a lot of excitement about the new drug, the number of patients who have been treated with it is relatively small, Dr. Durm cautioned.

“Given the fact that the drug is so well tolerated and has shown synergy with other drugs in preclinical models, it is an ideal drug to try in combination with other therapies,” he added.

Two other drugs that directly target KRAS G12C in the same way as AMG 510 are being evaluated in ongoing clinical trials. A small clinical trial of ARS-3248 (which Dr. Shokat helped develop) is recruiting patients. And results from the first two patients treated with the other drug, MRTX849, were recently reported.

Scientists are trying a similar direct targeting approach for another mutant KRAS protein, known as G13C, Dr. Shokat said. But that mutant is less common than the G12C form, he noted.