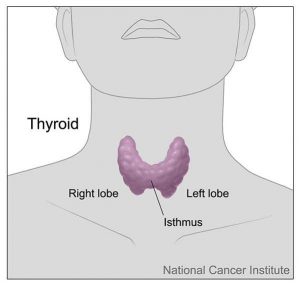 A new study has found that a test that measures genomic changes in tissue samples taken from the thyroid can help identify which patients likely need diagnostic surgery for thyroid cancer and which do not.

When a suspicious small growth or lump (called a nodule) is found in the thyroid, doctors perform a fine-needle biopsy so that the cells can be examined by a pathologist.

But up to one-third of the time, pathologists can’t determine from the appearance of the cells whether the nodule is cancerous (an indeterminate result), explained the study’s lead investigator, Yuri Nikiforov, M.D., Ph.D., of the University of Pittsburgh Medical Center.

Typically, people with indeterminate results go on to diagnostic surgery—the removal of the thyroid lobe that harbors the nodule. But most of these nodules turn out not to be cancer. So researchers have long been interested in developing molecular tests to assess indeterminate biopsy samples.

The genomic test used in this new study was able to accurately identify indeterminate biopsy samples that, after surgery, were found to be benign, the researchers reported November 8, 2018 in JAMA Oncology.

The test is one of several genomic classifiers for thyroid nodules that are starting to be used in the United States. The goal of developing this type of genetic test “is to safely prevent unnecessary surgeries,” Dr. Nikiforov said.

The incidence of thyroid cancer has been rising steeply over the last few decades, though this rise appears to have tapered off in the last few years.

Researchers think that much of this rise is due to the increased use of imaging procedures in the head and neck area to diagnose other conditions. Imaging can pick up thyroid nodules that don’t cause symptoms and never would have been found by feeling the neck.

This rise in incidence has led to concerns about overdiagnosis and overtreatment of thyroid nodules—the detection and treatment of nodules that would never have caused a medical problem.

To try to address the rise in diagnostic thyroid surgeries, Dr. Nikiforov and his colleagues developed the ThyroSeq Genomic Classifier test. The test measures changes in 112 genes that have been linked to thyroid cancer. These changes include mutations, gene fusions, changes in copy number, and alterations in gene expression.

The test generates a score based on how strongly each change found in a given tumor is associated with thyroid cancer. The cutoff for identifying a nodule as benign or cancerous was defined in a previous study by the team.

For the new study, the researchers recruited 232 people who were already scheduled to undergo diagnostic surgery following an indeterminate thyroid biopsy. After surgery, pathology results from the removed nodule were compared with the results from the genomic classifier test, which had been performed before surgery.

Traditional pathology reports on the surgically removed nodules determined that, out of 257 nodules (some participants had more than one nodule), 72% were benign, 24% were malignant, and 4% were a type of borderline malignancy that should be surgically removed.

Overall, the ThyroSeq test carried out on the biopsy samples taken before surgery classified 61% of the nodules as benign and 39% as cancerous. ThyroSeq correctly identified 94% of the nodules that were shown to be cancerous after surgery. The test performed about as well in all subtypes of thyroid cancer found in the study, including rare Hurthle cell neoplasms.

Of the 152 biopsy samples that were classified as benign by ThyroSeq, 3% turned out to be false-negative results: that is, the nodules were actually cancerous. This is about the same rate of false-negative results found among standard biopsies, explained Dhaval Patel, M.D., a thyroid surgeon in NCI’s Center for Cancer Research, who was not involved with the study.

“Sometimes when we biopsy nodules, [especially] if it’s a large nodule, we can miss the area that is cancerous. So up to 3% of the time the biopsy is negative, but it is cancer,” he said.

All the nodules that produced false-negative results on ThyroSeq were low-risk tumors that were nonaggressive and had not spread outside the thyroid, explained Dr. Nikiforov.

The test was also able to pick up some specific genetic mutations that identify thyroid cancers that are at higher risk of recurring or spreading. As more drugs are developed that target such mutations, this genetic information will become more useful for personalizing treatment, said Dr. Patel.

With three genomic tests now available to classify thyroid tumors, it is important for doctors to understand the characteristics of thyroid cancer at their own hospitals or centers before making choices about which test to use, explained Tracy Wang, M.D., chief of endocrine surgery at the Medical College of Wisconsin, who was not involved in the study.

These characteristics include how prevalent thyroid cancer is at their institution and how their pathologists tend to interpret results from thyroid biopsies, such as how likely they are to classify samples as benign or cancerous. All of these factors can influence which test would be most useful, she added.

“The different tests … all have their own strengths and weaknesses. And how you interpret those, and decide which test is more appropriate to use, is going to depend on rates of cancer at your institution,” Dr. Wang said.

But it’s important for doctors and patients to know that these tests are available, added Dr. Nikiforov, because they may be able to provide an alternative to diagnostic surgery for many patients. This type of test does not have to be approved by the Food and Drug Administration. But people should work with their doctor to determine whether their insurance will cover such testing, Dr. Nikiforov said.

“If we do a diagnostic lobectomy and find cancer, we [often] have to go back and take out the other side [of the thyroid]—you would have to go to the operating room twice.” Knowing that a nodule is cancerous ahead of time can ensure that all the necessary surgery can be done at the same time, he said.

Genetic information from the ThyroSeq test can also be used to determine whether an individual’s cancer is at low or high risk of spreading before surgery, said Dr. Nikiforov. This potentially could allow some people with low-risk tumors to have only one lobe of their thyroid removed, which can eliminate the need for thyroid hormone replacement therapy after surgery.

“Patients with positive [test] results can be treated in a more tailored way, not a one-size-fits-all way,” he concluded.