A Vaccine to Treat Non-Hodgkin Lymphoma Advancing in Clinical Trials 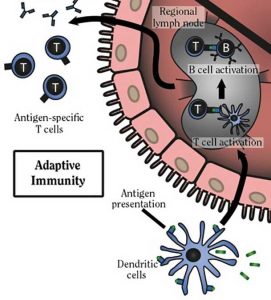 In some people with non-Hodgkin lymphoma (NHL), treating a single tumor with a mix of cancer therapies can help to shrink, or eliminate, tumors in other parts of the body, findings from a small clinical trial suggest.

The approach is called an in situ vaccine because it uses something in the body (in situ)—in this case, an individual tumor—to help create a body-wide immune response. It’s currently being tested in a small clinical trial of patients with slow-growing, or indolent, subtypes of NHL. Initial results from the trial showed that delivering the treatment directly to a single tumor in a patient could create an immune response against, and shrink, tumors throughout the body.

The findings were reported by Linda Hammerich, Ph.D., and Joshua Brody, M.D., of the Mount Sinai School of Medicine in New York, and their colleagues April 8 in Nature Medicine.

In addition, experiments the research team performed in mice suggested that the vaccine may be even more effective when combined with an immune checkpoint inhibitor, a form of immunotherapy that is already used to treat Hodgkin lymphoma and many other cancers. As a result, the research team recently launched a second clinical trial to test the vaccine in combination with an immune checkpoint inhibitor.

Last year, another group of researchers also reported positive results to treat indolent NHL, the most common subtype of which is follicular lymphoma.

Although it’s still too early to say what will become of the vaccine used in this most recent trial, the approach “looks to be very promising,” said Benjamin Heyman, M.D., of the University of California, San Diego, whose research focuses on developing immunotherapies for lymphoma but who was not involved in the study.

“This is certainly an important proof-of-concept finding,” agreed Wyndham Wilson, M.D., of NCI’s Center for Cancer Research, who also was not involved in the study. But whether the results seen in the trial participants will “turn out to be clinically meaningful will take more follow-up,” he cautioned.

Because indolent NHL develops so slowly (and often causes no symptoms), a major research emphasis has been on developing non–chemotherapy-based treatments, with the goal of limiting the development of treatment-related side effects and the risk of therapy-related second cancers.

Some existing therapies for indolent NHL, such as rituximab (Rituxan), already work in part by aiding the immune system in killing tumor cells, Dr. Wilson said. But they can cause side effects and don’t provide long-term remissions for many people.

An in situ vaccine makes sense to test in indolent NHL for several reasons, he added.

For example, checkpoint inhibitors and another form of immunotherapy called CAR T-cell therapy—both of which affect the behavior of T cells, the immune system’s primary killer of cancer cells—can shrink tumors in people with Hodgkin lymphoma.

“So that’s proof of principle that T cells can kill lymphoma cells,” he said.

Whereas these other immunotherapies generally affect or target T cells directly, an in situ vaccine works primarily by revving up the activity of another component of the immune system: dendritic cells.

Dendritic cells are sometimes called the generals of the immune system, because of their important role in marshalling the immune response. Namely, dendritic cells alert T cells to danger by taking up specific proteins, or antigens, on diseased cells, such as virus-infected cells or cancer cells, and then “presenting” these antigens to T cells; this instructs the T cells to attack and kill cells bearing these antigens. In addition, dendritic cells help to activate T cells, launching them into action.

To encourage all of this activity, the Mount Sinai team’s treatment approach for an in situ vaccine uses three components.

First, they inject a single tumor with a synthetic form of a protein called FLT3L, which helps to attract dendritic cells to the tumor.

Next, they deliver low doses of radiation directly to the tumor. The radiation damages cancer cells, causing those cells to release antigens that the dendritic cells eventually present to T cells.

Finally, another synthetic protein, called a TLR3 agonist, is injected into the tumor. This drug activates the antigen-loaded dendritic cells in and around the tumor, causing them to travel to lymph nodes where T cells reside and, if all goes as planned, initiate a system-wide immune response.

Other treatment vaccine approaches, including those that use dendritic cells, have used various means to select specific antigens on tumors against which to direct an immune response. But one drawback of that approach is that it may not account for differences in tumors from patient to patient.

An in situ vaccine, Dr. Brody noted, takes a different tack to identifying the tumor antigens that will induce the best immune response in each patient.

“We thought, ‘Let’s let the body choose the antigens,’” he explained, by having the dendritic cells attracted to the tumor present “all of the possible [tumor] antigens” to T cells.

Delivering the treatments directly to a single tumor is also likely to induce the production of only tumor-related antigens, Dr. Brody continued. Giving the treatment systemically, via an intravenous infusion, by contrast, “could release other antigens” and cause a broad immune response that isn’t specific to a patient’s tumors.

Before they launched the trial, Dr. Brody and his colleagues performed a series of experiments in mouse models of lymphoma to test whether the approach worked as envisioned.

Injecting the FLT3 drug into individual tumors in the mice brought dendritic cells flooding into the tumor site, they showed. Radiation therapy (which they were able to focus on tumors in mice using a lead shield and a tiny hole) caused tumors to produce antigens, which were then picked up by the dendritic cells. And treatment with the TLR3 agonist activated the dendritic cells, which in turn greatly increased the levels of tumor-targeted T cells.

The treated tumors shrank rapidly in many mice and, in approximately 40% of the animals, they were eradicated completely.

The tumor shrinkage was due largely to tumor cells being killed by T cells, not to the low-dose radiation, they found. Importantly, the activated T cells didn’t remain at the tumor site. They made their way through the circulation to other tumors in the mice, shrinking them or eradicating them entirely.

In mice treated only with an immune checkpoint inhibitor, tumors remained largely intact.

Encouraged by the findings in mice, the research team launched a small clinical trial to test the treatment in people with indolent NHL, most of whom had follicular lymphoma and several of whom had received prior treatment for advanced disease.

The treated tumor (which was selected largely on the basis of ease of access) shrank partly or entirely in 8 of the 11 patients enrolled in the trial at the time (enrollment is continuing). Six patients had no progression or small reductions in the size of tumors elsewhere in the body, and three had substantial reductions in these nontreated tumors, including one participant whose tumors disappeared entirely. Several of these responses have lasted for more than a year.

Importantly, side effects were very minor, with most patients experiencing a mild fever and other flu-like symptoms.

Dr. Heyman pointed to analyses in the study of tissue and blood samples collected from patients before and after treatment, which paralleled what was seen in mice, including an accumulation of dendritic cells at the treatment site and the presence of T cells primarily involved in cell killing.

Those findings, he said, confirm that the research team is “actually eliciting the immune response in humans that were seen in the preclinical model.”

Also similar to what happened in mice, T cells in most patients began to express checkpoint proteins following treatment.

Moving Ahead with Combinations

The Mount Sinai team’s newly launched trial will pair the vaccine with the checkpoint inhibitor pembrolizumab (Keytruda) in people with advanced indolent NHL, breast cancer, and head and neck cancer.

Pairing the vaccine with another immune-stimulating therapy makes sense, Dr. Heyman continued, because it can both strengthen the initial immune response and potentially make it last longer.

Combining immune-based treatments is “where things are moving in the field,” he said.

Indolent subtypes of NHL respond well to available treatments and many people with these cancers live for many years, Dr. Wilson noted. “But that doesn’t mean there isn’t room to do something novel like this [vaccine],” he added.

That’s particularly the case for the small but substantial subgroup of patients with indolent NHL in whom the disease can be more life threatening, including “transforming” into another, more aggressive form of lymphoma, he continued.

“So there will be patients for whom a treatment like this could be potentially lifesaving,” he said.