MGUS to Myeloma: Study Suggests Risk of Progression Can Change 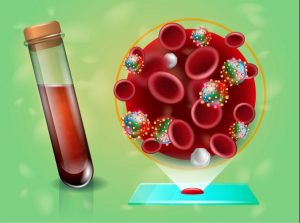 A new study suggests that a person’s risk of progressing from a benign condition called monoclonal gammopathy of undetermined significance (MGUS) to multiple myeloma, a type of blood cancer, can change over time.

On average, about 1% of people with MGUS go on to develop multiple myeloma each year. Doctors typically estimate a person’s risk of progressing soon after MGUS is diagnosed, using a test that measures the amounts of certain markers in the blood. That initial risk assessment guides how much follow-up care the patient receives.

But according to the new findings, published July 18 in JAMA Oncology, the levels of those blood markers—and the risk of developing cancer—can change over time.

“The study shows that most of the high-risk patients were low risk at some earlier point,” explained lead investigator Ola Landgren, M.D., Ph.D., professor of medicine and chief of the Myeloma Service at Memorial Sloan Kettering Cancer Center.

“So, if you’re only going to do one test to determine risk, it’s probably not accurate,” he added.

This is the first time that blood markers for MGUS progression have been prospectively and longitudinally tracked in people with the condition, noted co-lead investigator Jonathan Hofmann, Ph.D., M.P.H., of NCI’s Division of Cancer Epidemiology and Genetics.

Further studies are needed to confirm these results, wrote Nikhil Munshi, M.D., of Dana-Farber Cancer Institute, and his colleagues in an accompanying editorialExit Disclaimer. But if confirmed, the results “would require rethinking” how people with MGUS are cared for, they wrote.

Currently, only people who have a high- or intermediate-risk MGUS are recommended to receive annual follow-up tests to check for signs of progression. However, the study investigators said that their findings support annual blood tests for all individuals with MGUS, regardless of their initial risk assessment.

To explore that idea further, Dr. Landgren and others have developed and initiated a large randomized clinical trial in Iceland to screen for MGUS among all Icelanders age 40 years or older, and to explore the benefits and harms of annual blood testing for people with MGUS.

MGUS is a condition caused by abnormal changes in plasma cells, which are part of the immune system. Because it does not usually cause any symptoms and there is no standard screening, almost all cases of MGUS are discovered incidentally through blood tests for another condition or concern, explained Dr. Landgren, a former NCI investigator.

There is no treatment to prevent MGUS from progressing into multiple myeloma. Follow-up care for those with MGUS depends on a person’s initial risk assessment.

For example, current guidelines recommend that those with intermediate- or high-risk MGUS receive annual blood tests to check for signs of progression. Because the risk of progression is considered very minimal for those with low-risk MGUS, follow-up care is left to the discretion of the patient and their doctor. That could range from annual blood tests to no follow-up at all, Dr. Landgren noted.

These recommendations assume that the risk of progression stays constant, Dr. Munshi and his colleagues wrote.

However, if the risk of MGUS progression changed over time, someone whose disease initially  appears to be low risk and opts for no follow-up could develop high-risk MGUS and need more intensive follow-up. Without annual testing, the patient would be unaware of this change.

To follow MGUS progression over time, the investigators tapped into a massive trove of blood samples and related medical information from participants in NCI’s Prostate, Lung, Colorectal, and Ovarian (PLCO) Cancer Screening Trial. This trial investigated whether regular screening could reduce deaths from those particular cancers.

During the PLCO trial, participants who were randomly assigned to receive screening tests provided blood samples every year for 6 years. “The PLCO trial is a unique resource for this kind of study given the longitudinal collection of samples, large sample size, and long follow-up for cancer incidence,” Dr. Hofmann said.

The researchers then gave a risk score (low, intermediate, or high) to each blood sample from those nearly 700 individuals based on the levels of markers typically used to gauge MGUS progression plus a marker called immunoparesis.

They also included a test for an often-overlooked subtype of MGUS called light-chain MGUS. Light-chain MGUS, which can develop into light-chain multiple myeloma, differs from MGUS in the type of protein made by the abnormal plasma cells.

When they looked at how individuals’ risk scores changed over time, they noticed some interesting patterns. For example, about half of those who progressed to multiple myeloma—but only one person who didn’t progress—had a high-risk score in one of their samples.

But a few of the people who developed multiple myeloma had low- or intermediate-risk scores just 1 year before their cancer diagnosis. One potential explanation is that the abnormal plasma cells of these individuals acquired new genetic changes that led “to more abrupt progression,” the editorialists wrote.

Overall, similar trends were seen for those with the light-chain subtype of MGUS.

The findings that low- and intermediate-risk MGUS could convert to high-risk MGUS within a few years, the study authors wrote, “supports annual blood testing for all individuals diagnosed with MGUS or light-chain MGUS, as well as yearly assessment of a patient’s clinical risk status.”

A potential benefit of annual blood testing is that it could lead to earlier detection of multiple myeloma, which could lessen or prevent severe myeloma-related complications like a bone fracture or kidney failure, Dr. Landgren said. Many times, people with MGUS are diagnosed with myeloma only after suffering from one of those complications, he explained.

Three retrospective studies have shown that people who had MGUS and received annual checkups prior to being diagnosed with multiple myeloma were far less likely to have a severe complication than those who didn’t get checkups.

Another benefit of early detection is earlier treatment with “new, highly efficacious drugs which can translate into deep, sustained treatment responses,” Dr. Landgren said, including those that are negative for minimal residual disease.

A remaining issue is that there are limitations to using the standard blood markers to assess MGUS progression, the editorialists noted. These markers reflect not just the risk of progression but also the presence of progression, so an apparent shift in risk may just mean that the patient is already progressing, they explained.

Drs. Landgren and Hofmann are exploring other markers that may be more predictive of progression to myeloma. For instance, Dr. Landgren is studying the molecular characteristics of diseased plasma cells and the surrounding cells in the bone marrow of people with MGUS. Preliminary results, he said, suggest that certain genetic features could potentially help predict MGUS progression before it occurs.