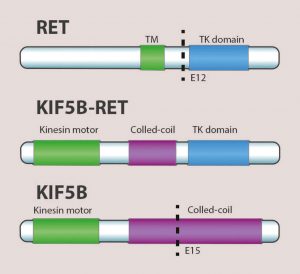 The investigational drug selpercatinib may benefit patients with lung cancer whose tumors have alterations in the RET gene, according to preliminary results from a clinical trial.

About 2% of patients with non-small cell lung cancer (NSCLC) have fusions between the RET gene and other DNA segments. These gene fusions can lead to the production of abnormal RET proteins that spur the growth of cancer cells.

Selpercatinib (LOXO-292) is a targeted therapy that works by inhibiting the activity of abnormal RET proteins. The drug is an oral therapy that patients take as a pill.

In the trial, more patients responded to the drug—that is, their tumors shrank—than has been seen with older drugs that inhibit RET. Patients treated with selpercatinib also had fewer side effects.

“This is a new drug that leads to durable responses” in patients whose lung cancers include RET alterations, said Alexander Drilon, M.D., of Memorial Sloan Kettering Cancer Center, who presented the trial’s findings at the World Conference on Lung Cancer in Barcelona on September 9.

The drug also crossed the blood–brain barrier and shrank tumors in the brain and other parts of the central nervous system, Dr. Drilon added, noting that this type of lung cancer frequently spreads to the brain.

Alterations in the RET gene are rare, occurring in less than 1% of most types of cancer. But they are more common in lung cancer and occur in 10% to 20% of thyroid cancers.

No targeted therapies have been approved by the Food and Drug Administration (FDA) for this form of lung cancer, known as RET fusion–positive NSCLC.

The results presented in Barcelona primarily cover the first 105 patients with RET fusion–positive NSCLC enrolled in the trial, called LIBRETTO-001. Loxo Oncology, the maker of selpercatinib, and Eli Lilly sponsored the trial.

The median duration of response was 20.3 months, and three patients had complete responses, meaning that there was no evidence of cancer remaining by imaging, according to Dr. Drilon.

“This drug looks like a very effective new therapy for our patients with lung cancer” who have RET alterations, said Roy S. Herbst, M.D., Ph.D., a lung cancer expert and chief of medical oncology at the Yale Cancer Center, who was not involved in the trial.

Several drugs designed to simultaneously inhibit RET and other cancer-related proteins have been tested in clinical trials in recent years, including cabozantinib (Cabometyx) and vandetanib (Caprelsa).

The difference between selpercatinib and older RET inhibitors, Dr. Drilon explained during his presentation, is that the new drug blocks only RET, which reduces the likelihood of side effects caused by interactions with multiple drug targets. By contrast, earlier RET inhibitors were multi-kinase inhibitors that blocked other proteins in addition to RET.

“This drug is much more specific in its targeting than earlier RET inhibitors,” said Dr. Herbst.

The most common side effects of selpercatinib included dry mouth, diarrhea, hypertension, and increased blood levels of two liver enzymes. Most of these were easily managed, according to the researchers.

“What we’re seeing with selpercatinib [in clinical trials] is very different from what we’ve seen with other [RET-targeted] agents,” Dr. Drilon said in Barcelona, noting that only 9 of 531 (1.7%) patients in the trial stopped receiving selpercatinib because of side effects.

The results presented in Barcelona build on earlier research that suggested that selpercatinib may be particularly effective against tumors that have spread to the brain and other parts of the central nervous system.

Earlier this year, for example, Dr. Drilon and his colleagues reported that a patient with RET fusion–positive NSCLC that had spread to the lining of the central nervous system responded to selpercatinib.

The patient, whose disease had progressed on a prior multi-kinase inhibitor and radiation therapy, had “a brisk and durable ongoing response” to selpercatinib, the researchers reported.

Nearly 25% of patients with RET fusion–positive NSCLC have cancer in the central nervous system at the time of diagnosis, and the disease frequently spreads to the brain.

Based on the data from the clinical trial, Dr. Drilon said that selpercatinib appears to have the potential to both treat disease in the central nervous system and even to prevent the development of brain metastases.

Loxo Oncology has said it plans to submit a New Drug Application to FDA later this year for approval of selpercatinib for the treatment of RET fusion–positive NSCLC.

Dr. Herbst predicted that selpercatinib would likely be approved and that doctors would start using the drug for patients whose tumors are found to have RET alterations through a test such as DNA sequencing/RNA sequencing or FISH.

The trial results, he added, “are so good” that a randomized trial comparing selpercatinib with another treatment, such as chemotherapy, probably would not be necessary.

Dr. Herbst has been attending the world conference on lung cancer for more than 2 decades and reflected on progress in the field.

“At a meeting 22 years ago in Dublin,” he recalled, “the most exciting presentations were about combinations of chemotherapy that improved survival for patients with lung cancer by a month or two.”

With the current study, “we are hearing about a drug that may improve survival for a year or possibly much more,” he continued. “That’s progress, and it’s been made possible by improvements in our understanding of the biology of lung tumors.”