Ronald DePinho: The Age of Cancer

“For me, this is one of the great honors of my research career,” says Dr. Ronald DePinho, who in 2009 won the prestigious Szent-Györgyi Prize for Progress in Cancer Research—and who has a touching personal tie to the namesake of the accolade. “I had the privilege of meeting Dr. Szent-Györgyi in my younger years, and was quite honored to later receive an award that bears his name.”

It is natural to assume that to win the Szent-Györgyi Prize, one of oncology’s top laurels, a researcher must unravel a Gordian knot of genetic codes or discover some heretofore unknown cellular process. DePinho, rather, secured his position among greats within the field of cancer research by elucidating perhaps the most mundane of all biological mechanisms: aging.

“When I started my career, it was already well recognized that advancing age is the most important risk factor for the development of cancer,” DePinho recalls. “And what was curious to me was that the types of cancers that mice and humans develop as they age were different. I thought that if I could understand the differences, then I might be able to illuminate why aging drives the development of cancer.” 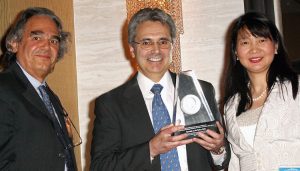 In 2019, and with our 20/20 hindsight, it can seem almost ridiculous that age and cancer were only so recently linked. We must keep in mind several factors, including the facts that it was only in the latter half of the 20th century that people began to live long enough for certain cancers to reveal themselves and that not all cancers ride on the coattails of old age. Retinoblastoma, a type of eye cancer, and juvenile myelomonocytic leukemia both strike children, and it is not unheard of for women to get breast cancer in their 30s or for anyone to develop skin cancer in their 20s. This seemingly scattershot appearance of the disease obscured what today is general knowledge.

“What was clear is that it was not an accumulation of genetic events that occur randomly that leads to the development of cancer,” DePinho continues, “but rather that there is an important mechanism that specifically targets epithelial cells—that is the major cancer source—for cancers of the aged. I thought that if I could understand that species difference, I might be able to understand the intimate link between the processes of aging and cancer.”

His work led to the identification of a destructive relationship between telomeres (the tips of chromosomes that act as buffers during cell division), the dearth of an enzyme called telomerase (which synthesize telomeres) and the p53 pathway. In biology, a pathway is a series of actions among molecules in a cell that leads to a certain product or a change in the cell. Such a pathway can trigger the assembly of new molecules, or turn genes on and off, or, in the case of p53, cause cells with damaged (and thus cancer-prone) DNA to die.

DePinho found that several age-related diseases, from cancer to Alzheimer’s, depend on the p53 gene and its pathway to progress. These diseases were shown to commandeer the pathway in order to create cancer cells or neurodegeneration. This, particularly, if the telomeres are already damaged from oxidative stress that occurs with age and an insufficient amount of telomerase.

“And this erosion of telomeres that leads to genetic instability and loss of p53, fuels the initiation of cancer,” sums DePinho. “Telomeres then become shorter over time, and eventually they reach a critical ‘shortening’ that then precipitates this pathway we discovered that causes aging. And if that happens in the context of p53 deficiency, instead of aging, you get cancer.”

Dr. DePinho’s research on the life history of cancer cells helped form the basic understanding of how developing cancer cells reach their fatal destination. His work recognized that the p53 gene functions as a tumor suppressor via activation of the apoptosis pathway (that is, programmed cell death) during abnormal cell cycling. If a cell has a mutation that causes a lack of p53, then the cell can continue to survive and become unstable, which is a source of cancer.

“If you understand the genetic base of cancer’s progression, that might illuminate interventive or even interception strategies that could lead to an impairment of an aspiring cancer cell.”

In other words: Get ‘em when they’re young. Even as we age.