Phillip Polakoff MD on the Biggest Challenges in Health and the delivery of healthcare in the U.S.A and worldwide 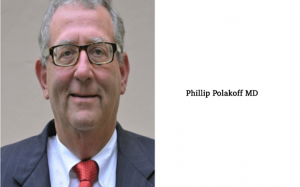 Phil Polakoff who has been engaged in the healthcare field for over 35 years, offers a unique perspective on where we are and where we are going.

Brett Johnson: Phil, what do you see as the biggest challenges in health and the delivery of healthcare in the U.S.A and worldwide?

Phil Polakoff: It’s quite complex. Health and healthcare are not defined as the same. Health is the state of complete physical, mental and social well being and not merely the absence of disease and infirmity, and healthcare goes on to the issue of illness and infirmity. As such, it’s how do you get the right care for critical health state. The balance is how you deal with social issues as well as dealing with care issues. So, it’s complex and each society has its own issues. On a U.S. basis it’s the Triple Aim, the cost of the case, the access of care and the quality of care. On a national basis, we have to address that and we haven’t done too great a job with that. On an international level, you run into other issues. You get the whole issue of personal health, public health, personal health, population health, place and political will. Each country addresses it differently. The industrialized countries are doing a very good job, and those that have problems with economic and social structure are having a real challenge. That shows up as problems with child and maternal issues, chronic disease issues and the like. It’s a big issue.

BJ: What guidance would you give us in terms of the most intelligent way to approach all of this complexity?

PP: Well, I think what you’re trying to do with KIP is on the right track. You’re making an enormous energy. The question is very simple in my point of view, getting started on health and health care issues. You have to think broadly about the factors that influence health. As we mentioned, there are quite a few. The factors that influence health fall into different groups: health behaviors, clinical care, social and economic factors and physical environment. Assess your needs and resources. What do you already have? What’s been done? What’s worked and what hasn’t worked? Who can you work with? Focus on what is most important. Find something that’s doable, has the resources and has the talent and community to deal with it. Choose the right policies, programs and products for your community. You really have to have the right innovation involved in this. Engage in the correct group of stakeholders, because you need them more than just the innovator or the clinician or the community health educator. These people have to work together. Lastly, you have to communicate. You have to have a common language that everyone buys into to reap success and have better health for one and all.

BJ: Who else do you see engaging in this attempt to make innovation and change?

PP: I think it’s a community of members. You need healthcare people, public health people, innovators and entrepreneurs, educators, philanthropists, investors, community development people, and you need government and nonprofits. Each one has a role, some will be key players and some will be participants. You really have to have an open forum where people feel engaged. Don’t forget that all of us are people, we’re consumers and we’re patients. It can’t be just that we’re seen as a data point. That is critically important. The hope for blockchain is relevant, artificial intelligence is relevant, machines and learning is relevant. But, how does that fit in on a personal basis?
BJ: Do you see any organizations now that are trying to do something like this? Who is leading the charge?

PP: That’s a great question. I think there’s a great number of different entities. Some are foundation-oriented. Robert Wood Johnson is really promoting a culture of health and the role of discrimination in preventing good health. The Gates Foundation is doing something worldwide on specific entities. There are many other foundations addressing individual diseases. Some governments in the past were doing incredible jobs with AIDS and the like. World Health Organization has the potential to do more, Center for Disease Control has the potential to do more. Fortune Magazine has their Brainstorm Conference that looks at innovation. I think that where the Klosters Innovation Partnership is going is exciting, because they’re trying to bring together a lot of individuals who represent different constituents, whether it’s the country that has the issues, the innovator who has potential solutions or the NGOs that can play a role, and how they hold accountable and develop a resource directory of experiences and lessons learned, and how they get people to communicate more regularly to find end products. I think there are players there, but I don’t think that they’re well-coordinated on a local, regional, national or global basis.

BJ: Interesting. As you think about all of this innovation and change, what do you see as the major obstacle? What do you think gets in the way of progress?

PP: Whatever my answer is, it’s not as good as the question. I think it goes from place to place. Some places it’s leadership, some places it’s resources, some places it’s who we’re thinking of first; our nation or on a global basis. Some is change for the future, such as where climate change fit into this, and do we realize its stakes. How do we change from an oil and gas and fossil basis to a sustainable energy source such as geothermal or wind or solar. Change doesn’t come easy. The major obstacle is that people are resistant to change. It takes success stories, sometimes small is better than large, to get it done. Sooner is better than later, and so is having good data that is evidence based rather than verbally based. In addition, make sure there is accountability to all stakeholders so that they feel like they’re part of something from the start until it comes to some realistic point. I’m a great believer in actionable research. You have to have the right research, but there also has to be an end product to it. To do research just for the sake of it is hard, and resources are tighter. There are obstacles, but there is such talent out there to make something happen.
BJ: What do you recommend as the critical first steps?
PP: Trying to deal with the first critical steps is to try to identify what the problem is, or what the list of problems is. So, you have a thoughtful discussion about what we can take on and what has been done to address this issue. If we’re looking at the U.S. specifically, what we’ve done poorly is look at the whole issue of opiate addiction. What is the cause of it? Is it caused by the pharmaceutical industry putting it on the table? Is it caused by the doctor prescribing it without evidence to do so? Is it caused by lack of cooperation and collaboration with the different parts such as law and order, mental health, clinical and pharmacology? The end point is to hopefully decrease the incredible rate of suicide that exists. Now that same example can be used for childhood illnesses in another country, or maternal challenges. It could be looked at with the whole problem with communicable diseases or chronic diseases such as cardiovascular and cancer. There’s no shortage of issues to attack, but I think you have to get a consensus in principle of where you’re starting and where you want to go. We’ve had successes. In the last hundred years, we’ve done incredible well with eradicating smallpox and for the large part polio and malaria. We’ve done well with antimicrobials with penicillin. We’ve done well with HIV, and taking it from an acute deadly virus to something that’s sort of controlled now. We’ve made significant progress with immunotherapy, and now CRISPR is coming of age with gene change. So, there have been success stories and we have to look at that throughout the continuum of health issues.
BJ: Interesting. You spoke at the Klosters Innovation Partners Forum in Klosters, Switzerland on this general subject. What’s did you cover at that gathering?
PP: I’ve been trying to address the issue of global health and transition from crises to sustainability, the state of global health and where it’s at today, health-related progress. We’ve made some progress, so we discussed eradicating extreme poverty and hunger, reducing child mortality, improving maternal health and combating HIV/AIDS.  I also want to look at where the key issues of innovation are, global leadership and touch on other issues of global health security, the issue of chronic disease. It was a very interactive conversation and it challenged people to think outside of their comfort level. Input their thoughts into the process and come up with next steps for KIP and other organizations working with KIP.

BJ: Can you tell us a little bit about your background, how you got into the health space and the experiences you’ve had?

PP: To try to make that short and to the point, my father was a physician. He was an immigrant from Eastern Europe, and some how I got embedded in his being a physician to walking that path. However, my path was a little circuitous. My first degree was in agriculture, my second degree was in environmental engineering, my third degree was in medicine and then into public health. I have the opportunity of looking into all of the different aspects of what health involves, and the different influencers of health, whether it’s health behaviors, social and economic factors, clinical care or physical environment. I’ve been challenged to see whatever way I can contribute in a team effort to making this a better world for one and all, for my generation as well as my children’s generation and their children’s generation. So, it’s a real opportunity and coming to Davos creates the opportunity to interact with hopefully likeminded people who are challenged to do something in a humanitarian way with direct outputs to better the health of one and all.

BJ: Terrific. Thank you so much for joining us today, Phil.

PP: It’s been my pleasure.